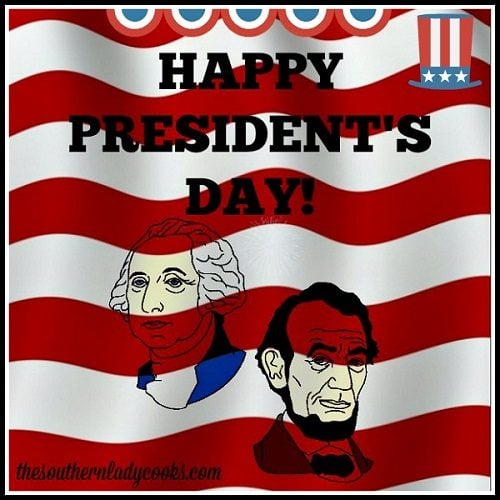 Find below a list of facts about Washington and Lincoln along with some favorite presidential foods to help you celebrate this holiday. George Washington:
Quote:  “My mother was the most beautiful woman I ever saw.  All I am I owe to my mother.  I attribute my success in life to the moral, intellectual and physical education I received from her.”
1.  Never finished school
2.  Became president on April 30, 1789
3.  Never had children with his wife but was stepfather to her two children
4.  Loved and bred foxhounds
5.  Never cut down a cherry tree. That is a myth.

6.  Picture is on the U.S. dollar bill.
7.  Wore ivory dentures not wooden teeth
8.  Some of Washington’s favorite foods were hoecakes and fish!  You can find my recipe for hoecakes and catfish here:  Fried Cornmeal Hoecakes and Fried Catfish Fillets. George Washington liked anything made with cherries. (I bet he would love these cherry recipes:  Cherry Cheesecake Ice Cream and Cherry Oatmeal Delight) Abraham Lincoln:
Quote: “Be sure you put your feet in the right place, then stand firm.”
1.   Born in Hardin County, Kentucky (my state!) on February 12, 1809. He was the 16th president of the United States.
2.  Profile is on the U.S penny and the five dollar bill.
3.  Was a daily Bible reader but never belonged to a church.
4.  Was shot by John Wilkes Booth on April 14, 1865 at Ford’s Theater in Washington, D.C.  Lincoln died the next day. Lincoln was 56 years old and the 1st president to be assassinated.  Lincoln had a dream regarding his death a week or so before.
5.  Established the Department of Agriculture on May 15, 1862.
6.  Had 4 sons with his wife, Mary Todd
7.  Loved animals
8.  Some of Lincoln’s favorite foods were bacon, fruits, oysters and apple pie.  Check out this bacon recipe along with a great apple pie:  Cheesy Bacon Apple Bread and Dutch Apple Pie.
Ronald Reagan is said to have loved Mac and Cheese and Monkey Bread while Dwight Eisenhower’s favorites were fudge and beef stew.  Richard Nixon was a meatloaf lover but Jimmy Carter loved Southern baked grits, country ham and red-eye gravy!
Have a great President’s Day, celebrate with some good cookin’ and Enjoy!
Don’t Forget to Pin President’s Day!

© The Southern Lady Cooks photos and text – All rights reserved. No copying, posting on other sites, or other uses allowed without written permission of the copyright holder.
You can “share” with friends by clicking on the Pinterest, Twitter or Facebook buttons below.  Click on the green square below with the picture of a computer to print this recipe.

Hi! We’re Leigh and Anne! The Ladies behind “The Southern Lady Cooks.” This site originated in 2008 by our mother, Judy Yeager. Now, in 2022 it’s a full family affair. Our mission is to share southern recipes that are easy and delicious, along with down-home dishes your grandmother would have made.